OGC is undergoing a revolutionary effort around modernizing their API specifications to align with current technology and design patterns:

Below are mappings between WxS specifications implemented in the MapServer suite and the relevant emerging OGC API standards.

Much of the underlying functionality needed to support the OGC API specifications already exists in MapServer and is exposed via WxS support. WxS support is complex owing mostly to the various versions of the service specifications that are supported. The code is full of conditionals so things behave differently or expose new functionality depending on version. The WxS specifications rely heavily on query strings (GET/POST) to configure requests and XML for responses.

While there will most certainly be opportunities to leverage portions of the existing OWS/WxS code, it doesn’t make sense to further complicate the main WxS functions. We can also develop the new functionality using C++ and can take advantage of modern C++ libraries such as nlohmann/json and Inja. Working in «clean break» mode also follows the OGC API approach to modernizing the APIs.

In order to support a RESTful, resource/path-based approach to requests we need to rely on additional CGI components beyond the query string or post-body: specifically information stored in the PATH_INFO environment variable. We also need a mapfile and some indication of what API specification is being used. We propose the following approach:

The PATH_INFO variable is part of the CGI standard and (at least with Apache) is already available to MapServer. In addition, MapServer already supports environment variable-based mapfile definition. It turns out to be relatively simple to check for the presence of PATH_INFO and redirect processing to a API dispatcher if necessary. The standard workflow is largely unaffected by this change so there should be no backwards compatibility issues.

This setup also allows for the query string to be utilized by APIs so you can combine things like so:

Metadata element naming should mirror API specifications to spare a new implementation from legacy naming conventions. However, WxS metadata should also be referenced as a fallback in order to leverage existing configurations. An example the API description where we would look for oga_description at the MAP level and fallback to ows|wfs_abstract if not found.

OGC API specifications rely heavily on JSON. The excellent nlohmann/json C++ library will be used to construct response objects for each request type. The library is best-of-breed and widely used by other OSGeo projects such as PROJ. More importantly, integration is simple: just include a single .hpp file. I propose actually distributing the nlohmann/json.hpp file with MapServer and then upgrading it as necessary. No complicated cmake configuration is necessary in that case.

nlohmann/json has a MIT license.

While not required, HTML support is strongly encouraged. Instead of somehow trying to store and output HTML from inside MapServer, I propose using a series of templates to support HTML responses. This gives us (and users) a great deal of flexibility to control the look and feel of API documentation. Base OGC API templates would be shipped with MapServer and are constructed using Bootstrap 4 by default. A second set of plain HTML templates will also be provided and will provide a stable base for msautotest support. The templates live in the MapServer distribution in a new share directory and are organized by API signature (so share/ogcapi/templates). All a user needs to do to configure HTML responses is to note the base path of the templates as a metadata value (oga_html_template_directory) or environment variable (OGCAPI_HTML_TEMPLATE_DIRECTORY).

The C++ Inja templating library is used to process HTML responses. Inja depends on nlohman/json so API responses will always be composed first in JSON and then rendered as HTML using Inja. Inja is full-featured and supports expressions, conditionals, loops and includes, amongst other things. Like nlohmann/json, Inja is easy to integrate using a single .hpp file. Again I propose distributing Inja with MapServer.

Inja also has a MIT license.

For consideration: should the SWIG MapScript class OWSRequest be enhanced to also allow to dynamically modify OGC API services?

Fixed API route elements must match precisely and are case sensitive. Any deviation will result in error.

We could consider extending validation like this to OGC services that accept filters._

Relatively few parameters are supported in this initial implementation:

Templates contain Inja template markup. The filenames are fixed in code (e.g. collection-items.html). The directory containing the templates is given in webObj metadata or (optionally) via environment variable. The directory specification is either absolute (e.g. /opt/mapserver/ogcapi/templates) or relative to the location of the mapfile. As present the implementation allows the use of the Inja {{ include «file» }} tag. It’s really impractical to maintain templates with common elements (e.g. header, footer, etc…) without that functionality. The current Inja implementation allows any value for the file attribute which represents a security risk if access to the templates is not limited. There are existing enhancement requests for Inja to add this functionality, or we’ll need to update the library to limit includes to the specified directory or sub-directories.

It is not clear how large of datasets can be handled via nlohmann/json and/or Inja (see above). The default maximum limit value of 10,000 may not be appropriate in many cases. It is possible to set a map and/or layer limit using oga_max_limit metadata. The layer value takes precedence. Paging is available for drivers the support it, leveraging the work done for WFS.

There should be very little overall performance impact. A single function is added to the mapserv.c workflow to detect an API request. The function inspects the PATH_INFO environment variable to see if the value (if any) matches the minimum pattern for an API call as described earlier. If so, elements in the cgiRequestObj are set and the request is quickly pushed into the OGC API processing workflow once a mapfile is loaded. 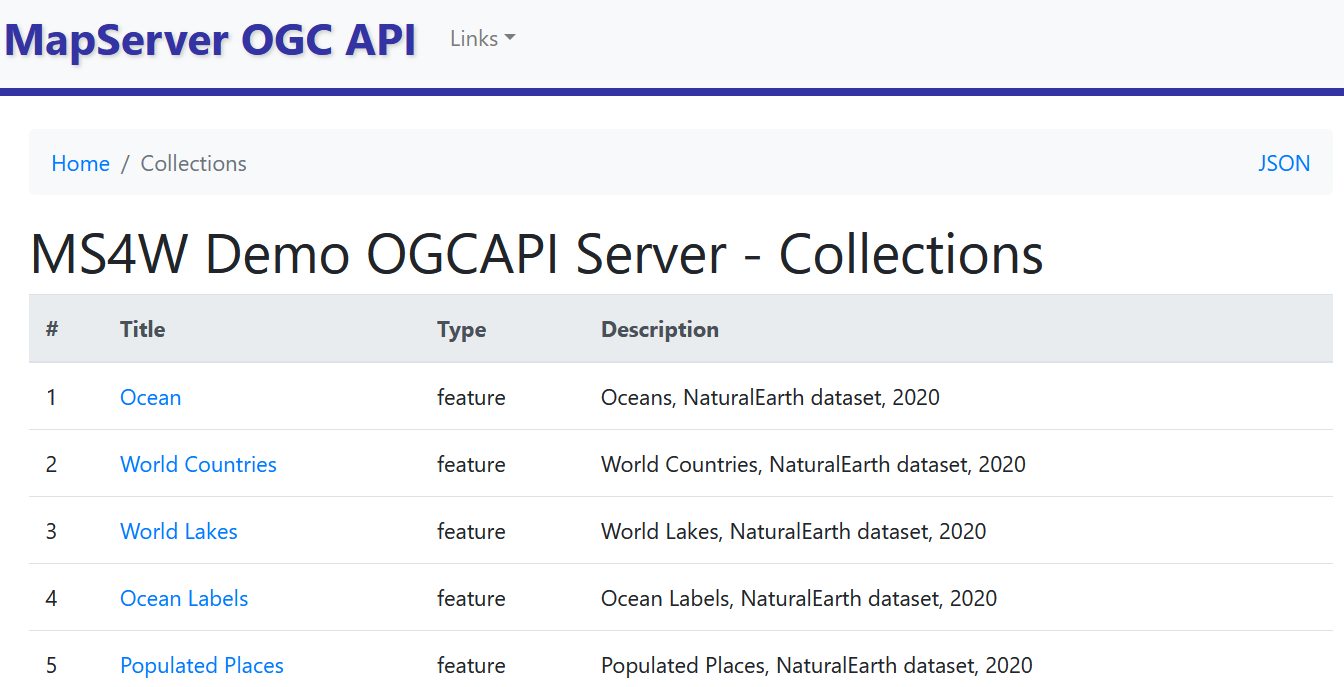 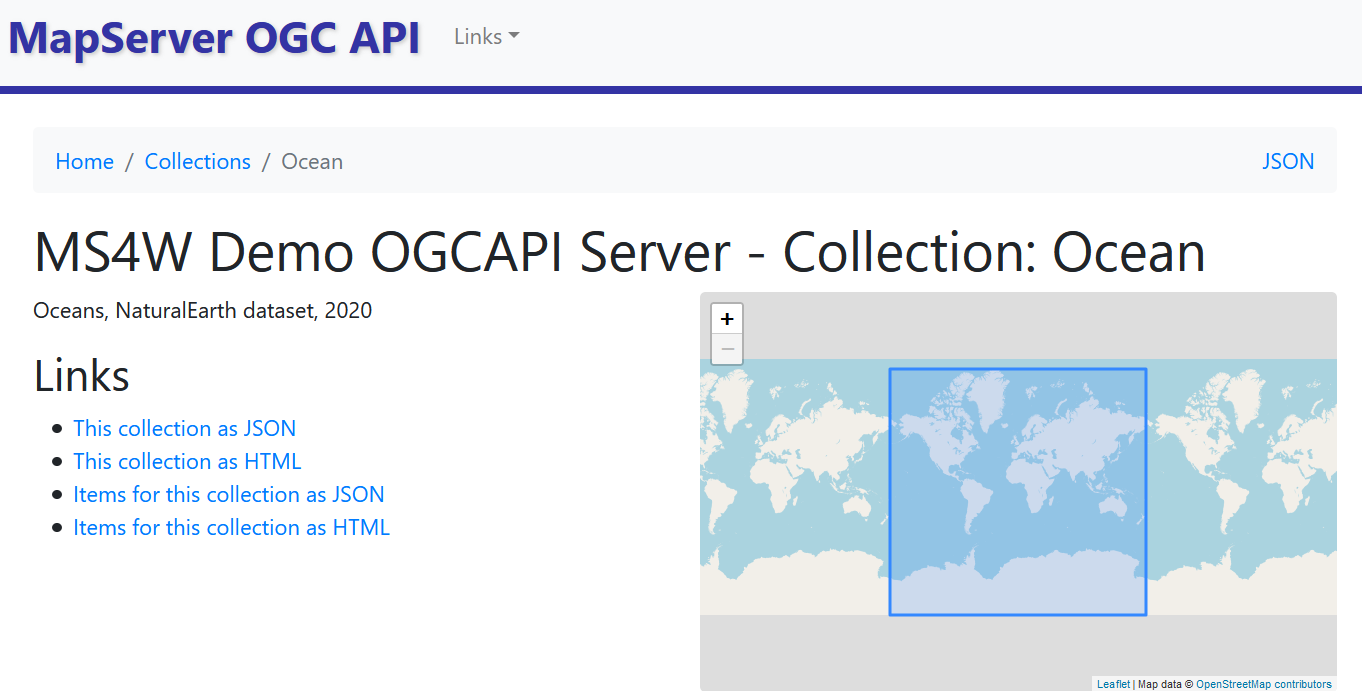